AAUW Louisiana strives to bring important and interesting programs to the general public, and co-hosts non-partisan, issue-based, public political debates in cities and on campuses around the state.

AAUW encourages members to exercise the right to vote and encourage others to do the same.

On August 22, we joined with the Louisiana Center for Health Equity (LCHE) on the Louisiana State Capitol steps to advocate for health equity for women in this state. Charmaine Caccioppi, Executive Vice President and COO of United Way of Southeast Louisiana is speaking. 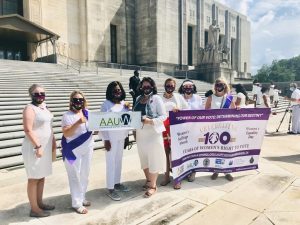 On August 26 we joined with Louisiana Voices of Women theater group (LAVOW) and The Society, Inc./Avant Garde Branch for a virtual event. It featured a short film of suffragists from the past discussing their efforts to gain the right to vote for women. After the viewing, Maxine Crump, Executive Director of the Dialogue on Race for a panel discussion of intersectionality of sex and race between then and now.

To view the full length film shown on the LAVOW Facebook page “Feminists Celebrate Suffragists: 100 Years of Voting” click here. Members of the three organizations starred in this film as present-day Feminists and historical Suffragists. The film was made at Louisiana’s Old State Capitol in conjunction with their event showing Louisiana’s part in the ratification of the 19th amendment. We thank them for their help and the use of their facilities.

Your vote is important! On August 26, 1920 the passage of the 19th Amendment to the Constitution gave women — after a long and hard struggle — the right to vote. Our votes remain a vital tool for shaping the policy issues that affect women every day.

Members are encouraged to join AAUW’s “Action Network” so they may receive email notification about national issues which relate to AAUW’s Public Policy Priorities of importance to equity, health, and education for women and girls, and civil rights.

It is important that members “SPEAK OUT” to voice their concerns either by writing to their representatives individually or by using “The Two Minute Activist” tool on AAUW’s website.

Find Your Representatives In The LA Legislature:

The Value of Belonging to AAUW

As an AAUW member, you’ll be proud to belong to this nationwide group of people who value education and equal rights, who are contributing to a more promising future for all women and girls, and who together provide a powerful voice for women and girls. This is a voice that cannot and will not be ignored.

August 26, is the anniversary of the passage of the 19th Amendment to the Constitution, which gave women — after a long and hard struggle — the right to vote. AAUW members were a key part of the fight for women’s suffrage then, and AAUW members know that equity is still an issue today. Women’s Equality Day is a time to remember that our votes remain a vital tool for shaping the policy issues that affect women every day.